No, they weren’t misbehaving. 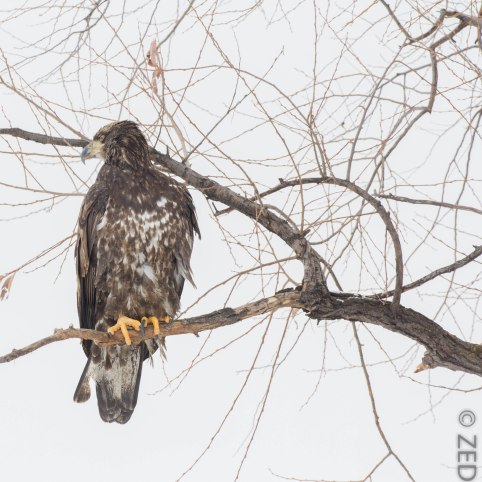 immature bald eagle (Basic I plumage – aka on its second year of life, likely approaching its 2nd birthday)

Bald eagles take five years before they grow their adult plumage, and in the early years many people can mistake them for golden eagles since they don’t acquire the characteristic white head and tail until adulthood.

One bird was perched on a branch very close to the road, and we spent a long period of time together at a very close distance. The bird preened and seemed relaxed (which let me know I wasn’t too close, something I’m always ultra-sensitive to – I try to always be far enough away that the wildlife feels comfortable and not threatened). This bird appears to be a young bird in its second year of life (now approaching its second birthday) – wearing what is referred to as a Basic I plumage (1st year, or hatch year is called a “juvenile,” second year is Basic I, then Basic II, Basic III and adult). The feather pattern for each year are variable but generally unique, combined with beak and eye coloring, and help to distinguish the age.

Nearby was another young bird, and this one had plumage that was different than the first – indicative of Basic II plumage (a bird in its third year of life). 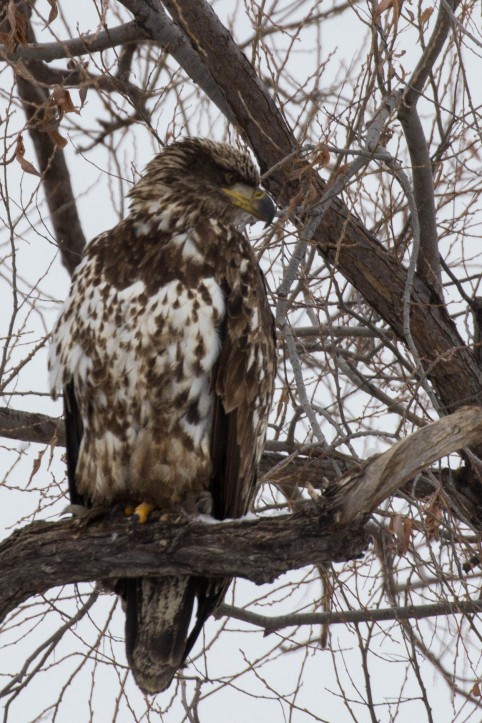 Along this same part of the Lower Klamath National Wildlife Refuge, there was a solitary treeline that had almost 15 bald eagles in it – along with many red-tailed hawks and one golden eagle. A ranger I spoke to said that two weeks prior, he counted over 60 bald eagles (and a golden eagle) in the immediate area of the treeline! The density of birds makes it such that species that usually don’t tolerate each other in close proximity end up roosting right next to each other, as did many bald eagles and red-tails that I witnessed over the two days (though occasionally a red-tail would go after an eagle, just to remind it who was in charge).

Being in an area like this really allows for a deep study into field identification of birds because there are so many species in the area.

A great time of year to visit is in February during the Winter Wings Festival – events are planned over a long weekend catering to raptor viewing, including guided trips in the Basin, education programs, vendor displays (optics mostly), and more. This year it takes place the weekend of February 11-14, 2016.

Klamath Basin report IV- the coyote and the eagle

Once again, sometimes you’re just in the right place at the right time. Two days in a row seems pretty good, eh? Though for all I know while I took pictures of this coyote and golden eagle together, there was a mountain lion dancing with a wolf just down the road.

I had been watching a golden eagle that was perched on a low sign along the snow-covered road in Lower Klamath National Wildlife Refuge for some time. There is something special about a close encounter with a golden eagle, and my breath leaves me every time I have an experience such as this. They are HUGE animals. Golden eagles can take down small deer! In other parts of the world where the eagles are slightly bigger and the wolves are slightly smaller, they kill wolves. This is an animal that is at the top of the food chain. An apex predator.

A beautiful one as well. 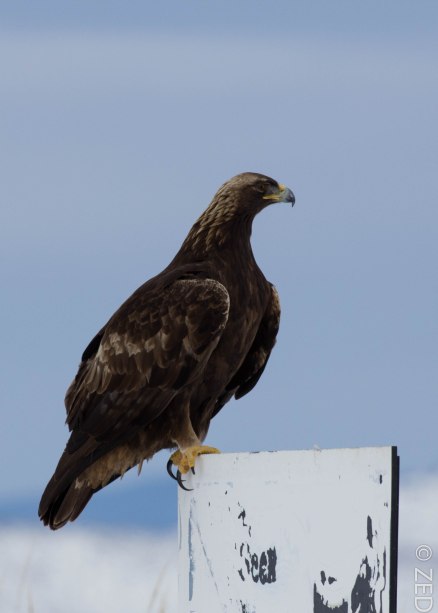 After observing the eagle for some time, it sliced (pooped) and took off to start hunting in the treeless wetlands around the wildlife refuge. Those wings!!!! Incredible to see an animal this size take flight.

After it took off, a quick movement caught my eye on the other side of the reeds along the snowy dirt road on which I was positioned. The roads are raised on levies to allow navigation through the wetlands. Most of the water is frozen though, and what I saw was a coyote moving away from me parallel to the road. Once my eyes locked onto it, it sensed it and increased its speed,  changing from a trot to a full-on bounding gait as if I were in pursuit! I am willing to bet there are hunters out there that take shots at them.

Eventually it stopped running, being sure to look back at me as if to say “I see you and don’t think for a second I am not watching you, two-legged.” It started to move at a fast trot along and through the reeds on both sides of the road, often crossing it. It appeared to be hunting, possibly trying to flush prey or looking to scavenge a meal. Or, it was following another coyote trail and marking its territory. There are coyote trails all over the place out there. The prolific amount of prey there in the Klamath Basin attracts more than flying predators. 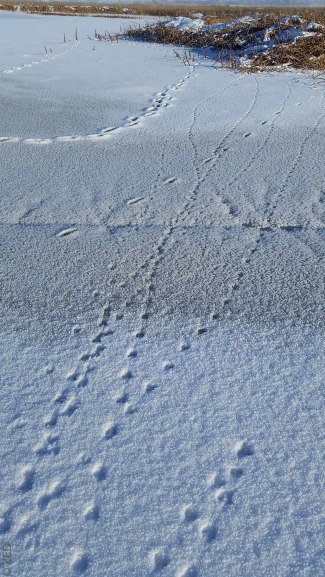 larger tracks in background are coyote, small tracks in foreground are from a bounding mouse (or mice)

Eventually the coyote disappeared, so I started driving down the snow-covered road again. In just a hundred yards or so, I stopped because I saw the golden eagle again, hunting about 20 feet off the ground over the wetlands, almost like a Northern harrier. I slowed to a stop to watch the hunt, and not long after, the eagle landed on another short road sign just ahead of me.

Suddenly, I caught sight of the coyote again, briefly, and then it disappeared into the reeds on the other side of the eagle – then re-appeared right next to the eagle!! I couldn’t believe it. The eagle did not seem the least bit surprised to see the coyote, even as it passed directly by it not five feet away. Nor did the coyote seemed surprised or concerned – despite them being well within striking distance of each other!!!!! The coyote paused near the eagle, and the eagle sliced (almost on top of the coyote), then the canine came out into the roadway, shot me a glance, smelled a fresh coyote scat (confirmed once I drove up there after the encounter), then disappeared back into the tule reeds by the eagle.

As I approached in my vehicle, I passed the eagle and we had a moment of looking directly at each other. It is an experience that is intense and humbling. After I passed, the eagle took off, and I was able to
take a look at the scat and tracks. The coyote continued to hunt along
both sides of the road for a few hundred yards until finally it
continued south over a large berm.

As mentioned in my last blog post, while I watched an otter consume a duck, a northern harrier came gliding down the canal and dropped down on a small bird in the vegetation on the side of the canal just 10 feet from the otter!

harrier attempts to subdue small bird now in its talons 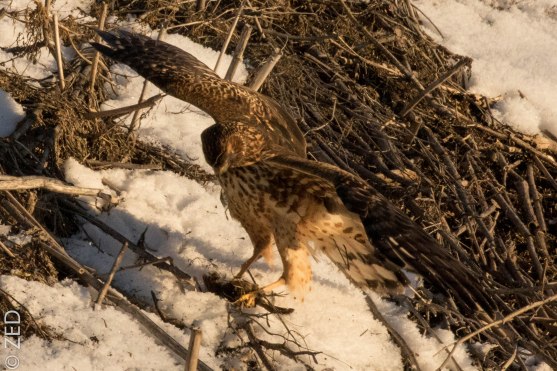 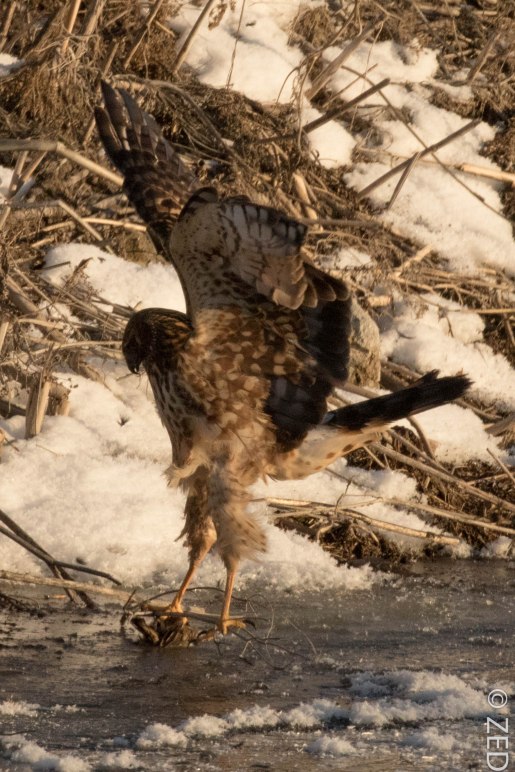 not quite – the struggle continues down on the ice

the harrier wins this contest

The whole time I’m shooting this scene the otter is just eating (and occasionally napping) away just 10 feet to the right. It was just ridiculous the amount of activity happening at this particular location.

One thing I noted while driving was that small birds were flying very close in front of my vehicle. I actually struck one of them, sadly. I’m wondering if their reaction time is slowed by the cold weather and if that gives an advantage to predators (who are primarily using gravity to drop down on their prey). Interesting to hear if anyone else has experience with this.

Klamath Basin report II- the otter and the (dead) duck

There is a lot of wildlife in the Klamath Basin, and not all of it has feathers.

Sometimes you are in the right place at the right time, and this was certainly one of those instances. With the incredibly low temperatures that were present for the last few days, there was almost no open water around – it was all frozen. One canal had some exposed water around an outlet pipe, with ice starting to encroach but enough open water to attract a small flock of water fowl.

I was out of my jeep watching a small group of pintails, green-winged teals, mallards and grebes in the small bit of open water, suddenly they “gently” flushed – they didn’t fly, but they walked out of the water. I didn’t flush them, but I couldn’t figure out what did. I turned for a moment to grab something in my jeep, when I looked back I saw what appeared to be a mallard duck struggling to get out of the water and onto the ice. Then I realized that it was actually the duck’s rear end that was out of the water! As my mind struggled to put the vision before me together, the duck slipped under the surface of the water. A few seconds later, a huge river otter popped up out of the water onto the ice with the (now dead) duck in its mouth! 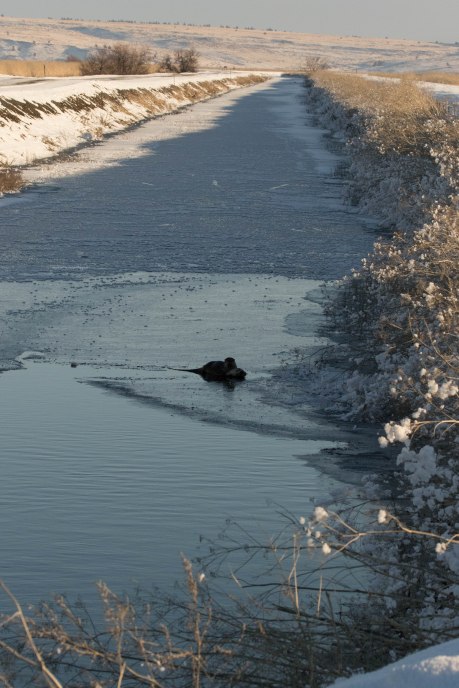 I watched it consume the duck for almost an hour, occasionally it would retreat under water (sometimes with its meal!) when other people drove by or came too close (which unfortunately some did come too close). 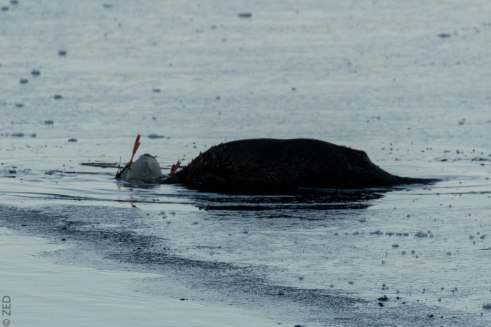 There were times that the otter appeared to nod off after so much eating, but he wasn’t about to stop – he just needed some dinner naps. I’ve been there.

otter in a mid-dinner nap

Otters are such a joy to watch, their behavior is always fascinating. Such beautiful, fun creatures. I’m sure the ducks felt differently. 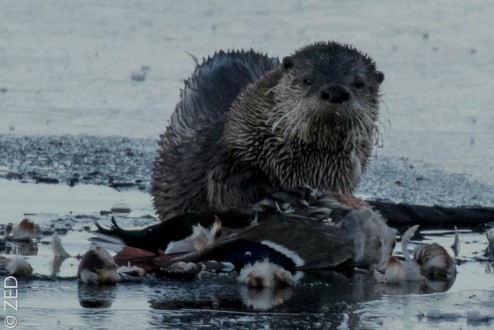 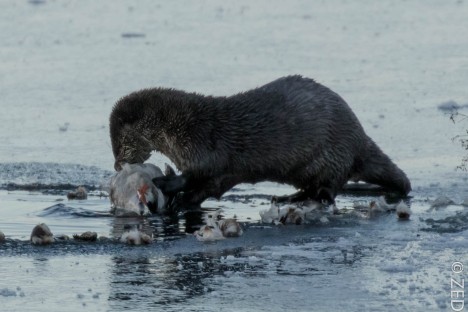 During the time I was watching the otter, a northern harrier floated down the canal in the air and made a successful strike on a small bird – just 10 feet from the otter! I’ll put the series of pictures from that in the next blog …

The show wasn’t over though. After that a prairie falcon came in and made an unsuccessful strike on a small duck in the canal behind me! This place was a hot spot!

The other water fowl seemed to realize the otter was satiated, as they came back into close proximity of the otter as it was eating and even afterwards while he was still in the area. After the otter finished, another harrier moved in to scavenge the duck as the sun set. 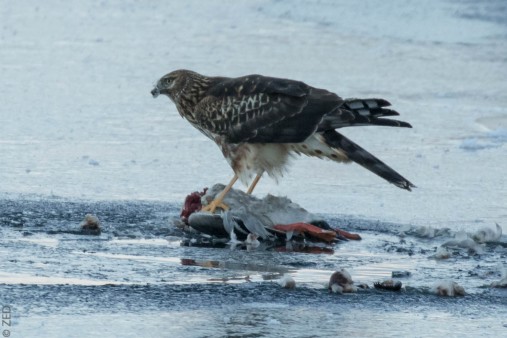 I imagine it wasn’t long after I left that the coyotes I heard howling nearby moved in for the rest of the scraps. Their tracks were all over the Basin area, and I saw four of them during my two days there, moving at a rapid pace through the preserves as they hunted.

A ranger that I told about the encounter had been at the same location earlier and saw a bobcat. It was likely no coincidence that this spot was so active – the open water attracted the water fowl, which in turn attracted the predators.

Such a fun day. I stayed out past sunset watching everything unfold, and the temperature dropped quickly. I was happy to get back to town that night for a warm bed. Unfortunately I had some camera malfunction issues, so my shots aren’t as good as I’d hoped (auto-focus issues) – I learned the hard way to test new equipment more thoroughly before being out in the field! That is minor though – WHAT A DAY!!! It’s not often that you see this kind of show!! Very grateful to have the opportunity to be up there and that there are people protecting it. Check out KS Wild, one of the many groups helping the cause. 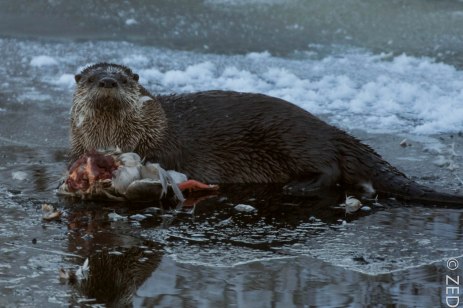