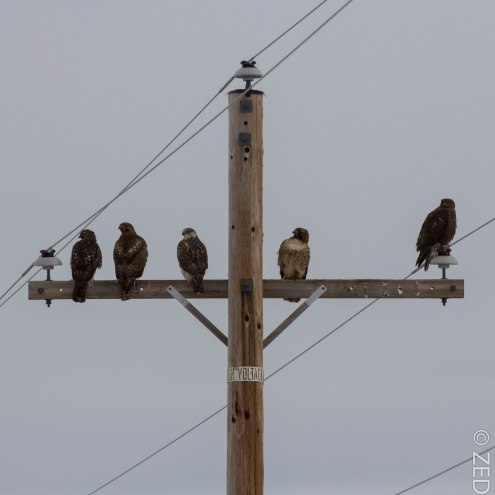 Cowboy boots ‘n mountain buttes
Pick-up trucks ‘n luckless ducks
Hungry hawks ‘n too-thin socks
Saw eagle with coyote, like I was on peyote
So comes to a close, my trip to the Klamath Basin

Ha!! Ah jeez. Not my best work there.

Regardless, some of the best action on my trip was saved for last. As I left the area, I stopped off in an spot that was reported to have large numbers of ferruginous hawks, a species that I had seen scant sign of in the Klamath Basin just to the north.

Initially I wasn’t seeing any raptors at all as I drove along some of the roads in the snowy flat lands that consisted primarily of ag fields or open, high desert ecosystems. Thee wild areas featured primarily rabbit brush and desert sage, with the occasional juniper tree. There were jack rabbit and coyote tracks all over the place.

I was shocked that there didn’t seem to be ANY raptors around an area that seemed like it would be full of prey. The reason? They were all in one spot. Literally. When I finally found the raptor swarm, there must have been over 100 birds of prey in the 360 degree view around me – and two coyotes! They were in a number of adjacent ag fields that hadn’t been plowed. The mice/vole/ground squirrels populations there must be outrageous. Everyone was there for lunch!

There was a line of telephone poles along the country road, and on almost every other pole there was at least one raptor – but sometimes as many as five on one pole! And sometimes multiple species! I had never seen anything like this. 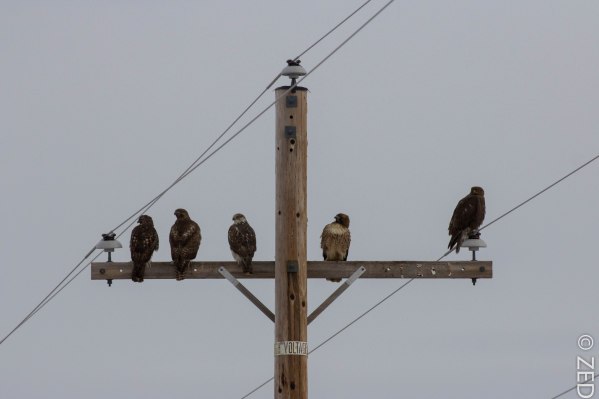 same crew as the above picture, but with an adult ferruginous hawk doing a fly-by! / Butte Valley CA

immature bald eagle on the front pole, and raptors on almost every pole thereafter down the road / Butte Valley CA 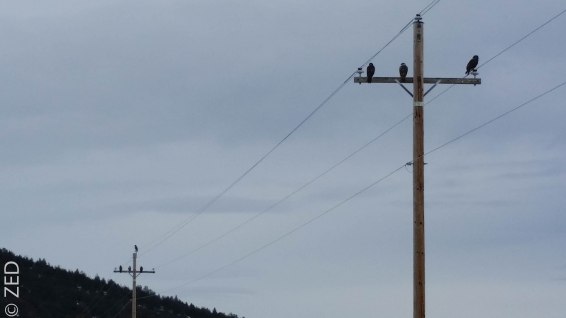 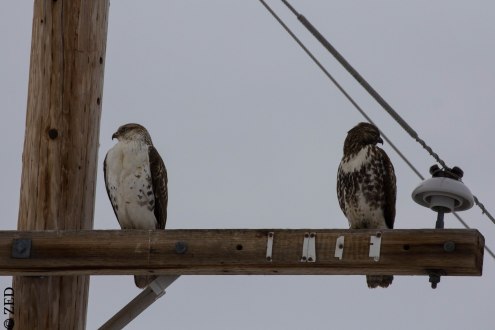 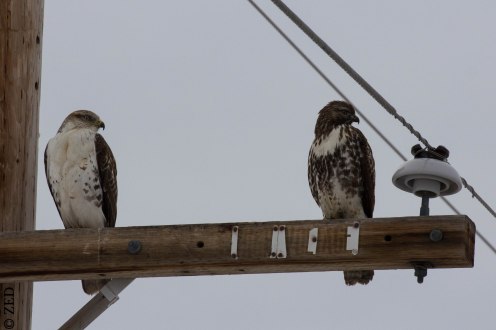 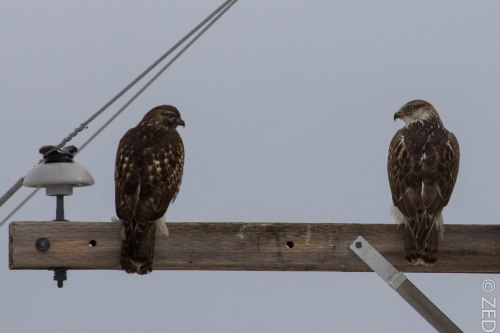 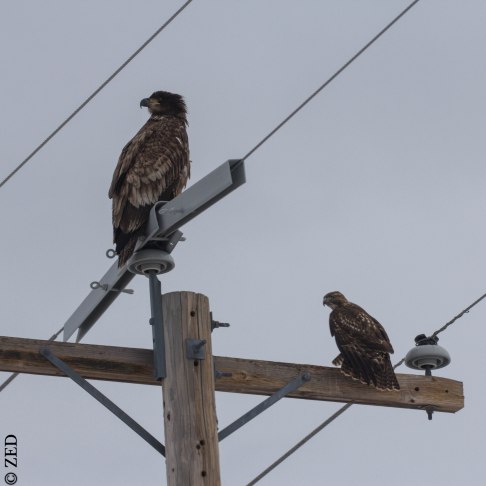 There was an irrigation wheel line with eight segments on it, and I counted 19 raptors on it (including bald eagles, ferruginous hawks, rough-legged hawks, and red-tails)! In the immediate area were a lot of red-tailed hawks mostly perched on something, and all over the ground in the fields there were ferruginous hawks everywhere (probably 50+ of that species alone)!! There were also a good number of Northern harriers, bald eagles, rough-legged hawks, and at least one golden eagle. Plus the two coyotes. It was unbelievable.

What an incredible finale to my trip. It often happens that way – as if the Spirits of the Land are trying to get me to stay. I will certainly be back there soon. 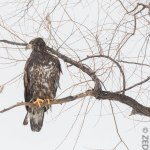 No, they weren’t misbehaving.

immature bald eagle (Basic I plumage – aka on its second year of life, likely approaching its 2nd birthday)

Bald eagles take five years before they grow their adult plumage, and in the early years many people can mistake them for golden eagles since they don’t acquire the characteristic white head and tail until adulthood.

One bird was perched on a branch very close to the road, and we spent a long period of time together at a very close distance. The bird preened and seemed relaxed (which let me know I wasn’t too close, something I’m always ultra-sensitive to – I try to always be far enough away that the wildlife feels comfortable and not threatened). This bird appears to be a young bird in its second year of life (now approaching its second birthday) – wearing what is referred to as a Basic I plumage (1st year, or hatch year is called a “juvenile,” second year is Basic I, then Basic II, Basic III and adult). The feather pattern for each year are variable but generally unique, combined with beak and eye coloring, and help to distinguish the age. 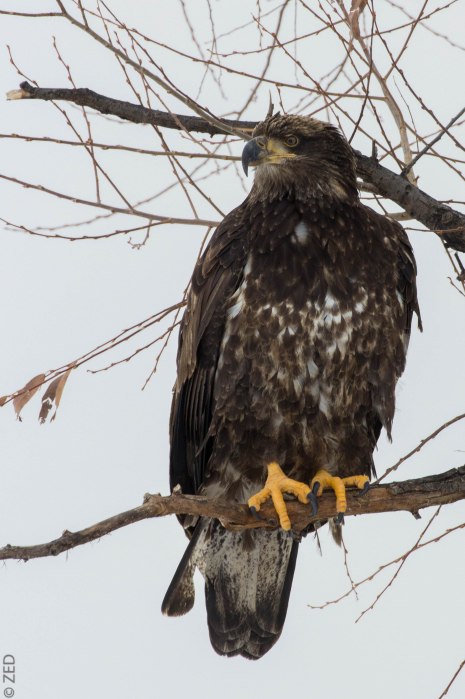 Nearby was another young bird, and this one had plumage that was different than the first – indicative of Basic II plumage (a bird in its third year of life). 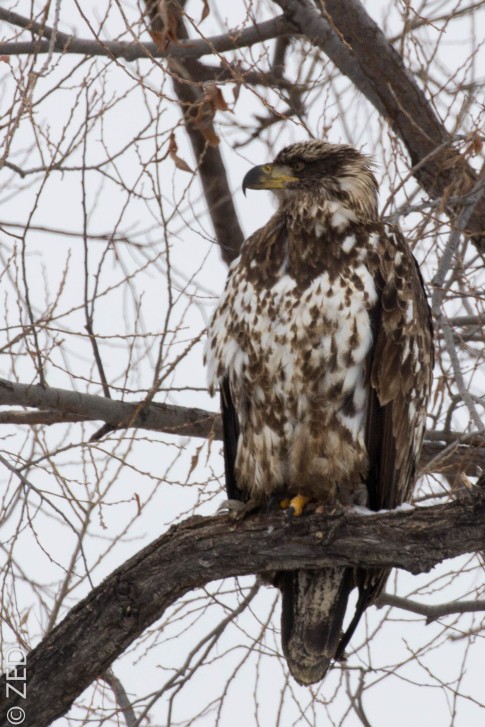 Along this same part of the Lower Klamath National Wildlife Refuge, there was a solitary treeline that had almost 15 bald eagles in it – along with many red-tailed hawks and one golden eagle. A ranger I spoke to said that two weeks prior, he counted over 60 bald eagles (and a golden eagle) in the immediate area of the treeline! The density of birds makes it such that species that usually don’t tolerate each other in close proximity end up roosting right next to each other, as did many bald eagles and red-tails that I witnessed over the two days (though occasionally a red-tail would go after an eagle, just to remind it who was in charge). 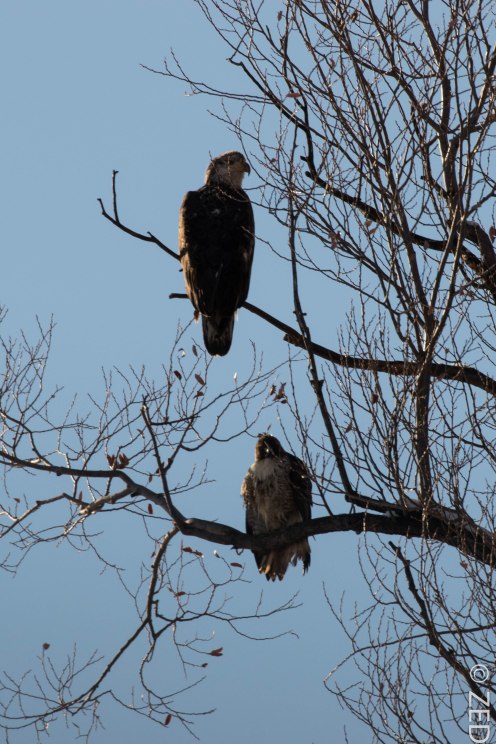 Being in an area like this really allows for a deep study into field identification of birds because there are so many species in the area.

A great time of year to visit is in February during the Winter Wings Festival – events are planned over a long weekend catering to raptor viewing, including guided trips in the Basin, education programs, vendor displays (optics mostly), and more. This year it takes place the weekend of February 11-14, 2016.

Klamath Basin area with view of Mt McLoughlin in the distant background, a volcano which lies in the Cascade mountain range to the northwest

The Klamath Basin area is home to multiple National Wildlife Refuges (six of them!), and is a major stop-off for migrating water fowl along the Pacific Flyway during the autumn and spring. This flat high desert area (around 4000 feet elevation) straddles the border of Oregon and California and is just east of the Cascade mountain range. It is also host to a lot of agriculture, using waters diverted from the Klamath River to irrigate fields. The Basin sits in view of several volcanoes that are part of the Cascade range, and the area is of volcanic origins. It is truly a magical landscape. Recently it has become even more exciting as there are now two small wolf packs that call the Cascades just west of the Basin home (one of which is the famous OR-7 wolf, who at one point traveled to California and became the first confirmed wolf in CA since the 1930’s)!

snowy pass through the Cascades!

The wetlands themselves are estimated to be only 25% of what they once were, due to appropriation of land and water to agriculture. Many interests share this region, and it is often the subject of debate on how to best share the resources among all them, including Wildlife/Plants, Indigenous People, agriculture, hunters, birders, fishing folks, etc.

Klamath Basin area – open area of the Oregon Straits slough, an ag area that attracts a lot of wildlife

Klamath Basin area – dikes, levies and canals define much of the mostly treeless landscape outside of the National Wildlife areas

During the winter months, there is a very high population of raptors that migrate here to wait out the winter due to the availability of prey (and it should be noted that agriculture fields that are dormant often provide a home to many rodents, thereby attracting more raptors). Here during the winter can be found the highest density population of bald eagles in the continental U.S. outside of Alaska! I have been there previously and seen around 50 eagles in one 360 degree view! Not only that, there are a lot of northern migrants such as rough-legged hawks and ferruginous hawks, species not often seen this far west or south. Those in addition to golden eagles, red-tailed hawks, northern harriers, assorted falcons, many owls and more can be seen here.

I braved some cold temperatures, especially the first day – it was near 0 deg F. A ranger I spoke to said that in the morning he had seen a northern pintail (type of duck) that came out of some reeds and couldn’t get its wings to extend – they had frozen to its body during the night! That’s cold (it eventually did free its wings). Needless to say there weren’t many people out there besides me, but I was able to see some amazing sites and sights (which I’ll highlight over the next few blog posts).

A few of the birds during the trip: 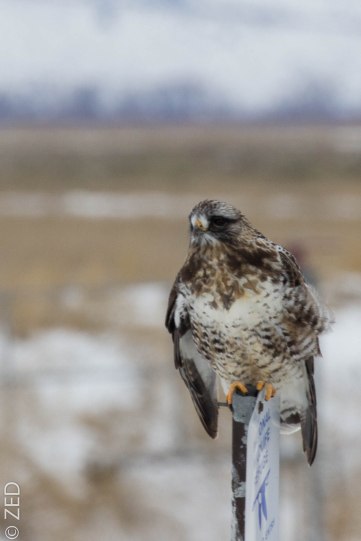 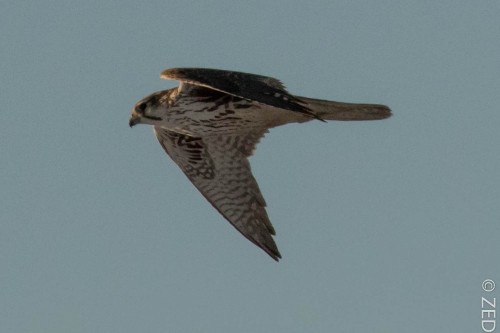 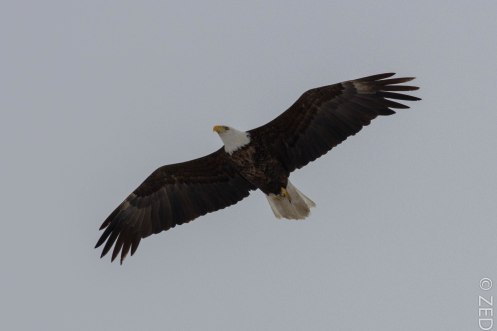 My final picture of the first day is a great summary of the area. The sun had set over a half hour before I took this picture – I saw these birds sitting in a tree as I was driving out. My old jeep was not doing a great job of keeping the cold out, but despite my numb fingers and toes I got out to snap this shot. As you can see, the area does not have many trees, so they are coveted by many different birds. Because of the density of prey and lack of trees, often I see multiple species sharing a tree or telephone pole – a necessary truce. The large forms in the tree are a bald eagle on the left, and a red-tailed hawk on the right! They are buddies! At least for the night (usually I see red-tails chasing and harassing bald eagles). Sprinkled among mostly the tree on the left are many red-winged blackbirds as well. 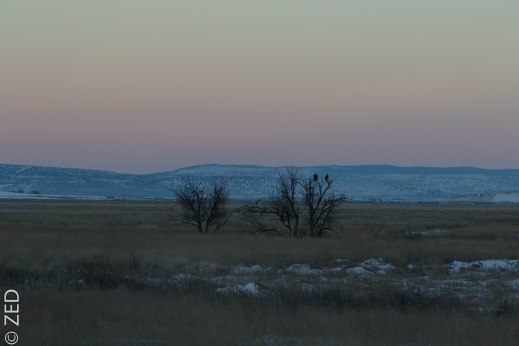 Some great resources to learn more about the area:

Winter Wings Festival – http://winterwingsfest.org/
This February weekend (this year it is Feb 11-14 2016) focuses on raptors in the Klamath Basin area and attracts many people to the area. Tours and guides are available, as well as many other events. Definitely worthwhile!!!

Lava Beds National Monument is nearby, and Mount Shasta is not far to the south. The whole area is really magical, any time of year.