we were treated at the beginning of the morning just after sunrise to the five resident Otters foraging in the lagoon, and a visitor that I have never seen before in this immediate area … a golden Eagle!

the above picture was of a creature foreshadowing things to come – this red-legged Frog (?) was a precursor to SO many Frog tracks in the sand, along with many deer Mice and brush Rabbit tracks – appearing in the middle of bare sand dunes for reasons unexplained. I surmise the new moon allowed some expanded forays for these normally reclusive species who stick to the cover of the plants on the edges of the dunes during most times. 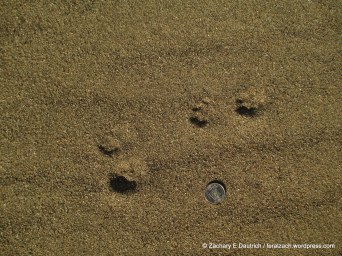 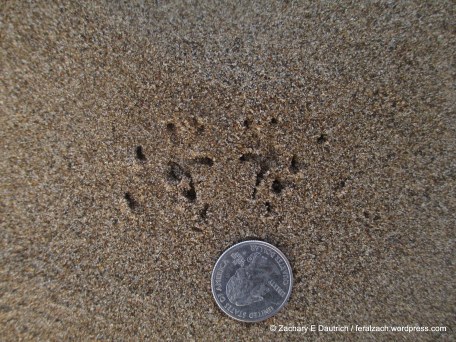 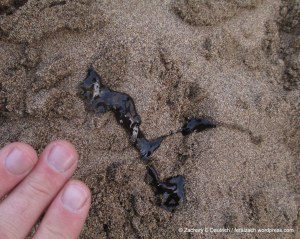 Bobcat (on right) and some type of amphibian (Salamander) tracks on left – perhaps an Ensinitas? 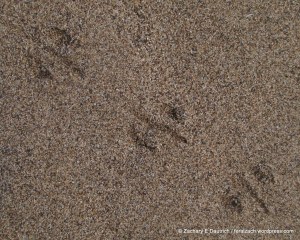 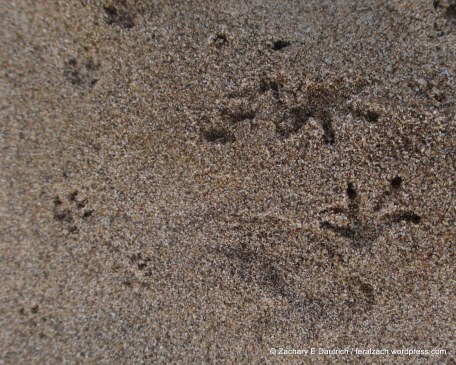 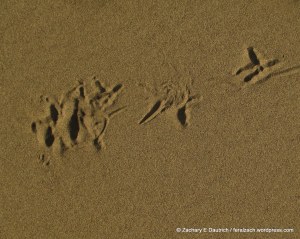 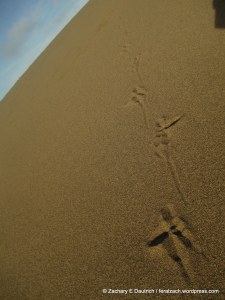 WOW! what a find!!!! the trail seen in the picture from the left is a great-horned Owl coming in for a landing (final landing spot seen in the center of the picture). you can see it’s wing and tail feather imprints in the sand. also you can see a Raccoon trail diagonally across the picture from lower right to left (occurring after the Owl), along with faint Frog tracks paralleling the Raccoon, and some two-legged tracks at the top. 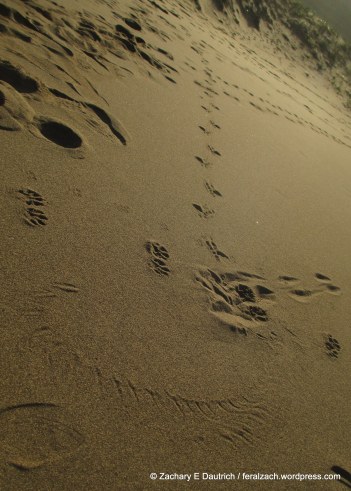 another view of the great-horned Owl landing spot (along with feather marks in sand!!), and its trail leading away from the landing point – ultimately to a take-off spot around 10 yards away. again, you can see the Raccoon trail across the center, and many other tracks in the background. 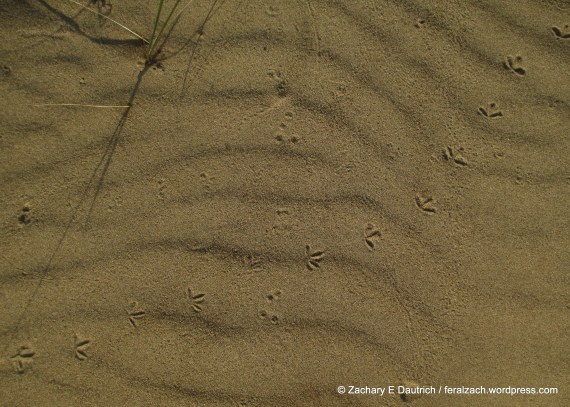 Sanderling trail (?)  … though I’m open to other interpretations … and some faint deer Mice, Frog and insect trails – this was found in the lagoon sand dunes, far from the surf 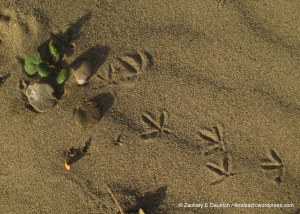 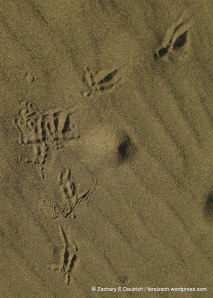 another (!) great-horned Owl trail in the sand dunes!

one of my favorites to see live (but seldom a dependable sight), there were plenty of north american river Otter tracks around 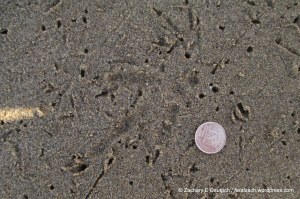 the turkey Vultures are always hanging around for a meal, and this (faint) track (among smaller shore bird tracks) showed that they are quick to come in on the remains of shore birds who are predated at the lagoon by a varied cast of opportunists … 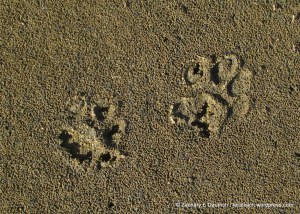 Bobcat tracks (nice shot of front and rear) – based on the size and the shape, we decided it was likely a male 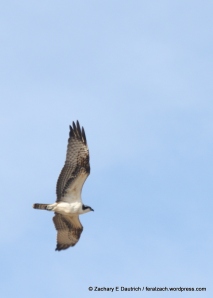 Osprey – one of the NINE raptor species that we were treated to seeing on this day (Osprey, northern Harrier, white-tailed Kite, Kestrel, peregrine Falcon, turkey Vulture, Red-tailed hawk, Ferruginous hawk, and golden Eagle!). My friends also saw a Cooper’s hawk as they were driving out.

these snowy Plovers, a highly endangered species, were using human tracks in the sand as wind breaks from the increasing gusts coming in from the ocean – it was pretty adorable 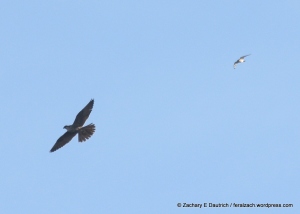 the “mud hen,” or Coot – top of the menu for many predators at this time of year here. when the Otters come by, they move to the shore and band together, waiting for them to pass 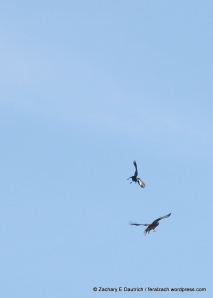 for reasons still not understood (by me), the Ravens were harassing the Red-tailed hawks as usual. perhaps it is for fun or to prove social status … fun, being something that the Ravens seem to incorporate into their lives all the time, evidenced by their frolicking in the air lifts caused by the oncoming winds into the dunes. seeing them play in the air is like watching Otters in the water, the energy is simply fun!

lots of black-tailed mule Deer around in the fields, where we also saw lots of Badger sign 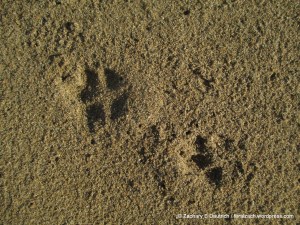 the only animal signs that I might have expected to see and didn’t on this day were the grey fox and jack rabbit. grey Fox sign isn’t often seen right in this area, but jack Rabbit is. curious.

what a great day out at Point Reyes National Seashore, this place is such a gift – may it be protected for all this diversity of life to thrive, always.