the ravens and the bobcat

After a day of what could be the last rain of the season, I decided to motivate myself for a much needed attitude adjustment. I was grumpy, and pretty unmotivated. I knew if I went out for a wander/hike, things might shift. I figured “future Zach” might really appreciate “past Zach” more if “current Zach” got off the couch.

It was just before sunset, and the clouds were starting to break up, yielding some blue sky and a beautiful setting sun sometimes shining from behind the clouds. The puffy clouds that were left after the rain were now highlighted in beautiful pinks, purples, and oranges. The air was calm and there was a divine serene quality to the light and the moment.

I wasn’t far into my wander when I heard a lot of raven sounds. It’s not unusal to see them in this area, but usually they are moving around, soaring, and don’t typically hang around one particular area for too long. And usually they are in pairs here. As I turned a bend, I started to see them. Some were flying, some were perched or hopping around a grove of eucalyptus trees. There were at least four or five ravens, and I stopped to watch and listen. At first I thought perhaps it was a young family of newly fledged ravens, just playing on the hillside and in the grove of trees. They didn’t necesarily seem focused on anything in particular, but I decided to circle around to the other side of the eucs to get a better look.

I’ve written before that in the northern part of Wildcat Canyon Regional Park, I have never seen definitive bobcat sign nor a live bobcat in the three years that I have been going there (ironic, given its name!!). My explanation was that due to the open grassland and minimal cover in this area (most of it is grazed by cattle for fire suppression), coyotes are the dominate predator because they can adapt to the terrain better. Between the lack of cover and proliferation of coyotes, it is not ideal bobcat terrain. Not only that, many people walk their dogs in this area, and again, coyotes are better equipped to deal with that scenario. Bobcats like to be near edges of vegetation, so they can easily “disappear” to escape threats. Further south in Wildcat Canyon, there are more chapparal and riparian zones with lots of cover, and sure enough I’ve found (and seen) bobcats and their sign there.

That all changed a few months ago. I was out after dark in the northern part of Wildcat and somehow in the dim light I spotted a single cat track in a patch of mud on a lightly used cow trail in an area under eucalytus trees and close to more dense cover (other trees, poison oak, blackberry, coyote brush, etc).

Then, in the middle of April, I was on a run passing through the same general area and I spotted fairly fresh bobcat scat. It was classic bobcat scat – sometimes coyote scat can be a similar size and they can be confused, but not this one. It definitely tasted like bobcat scat (joke). 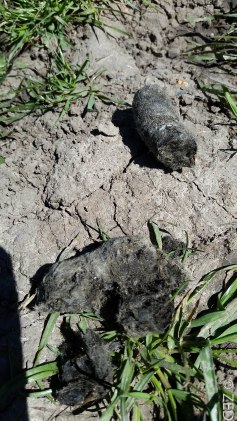 The evidence was mounting that a bobcat had moved into the area.

As I came around the other side of the euc trees I saw two ravens side-by-side on a branch, not very high up (probably 20 feet). They were very vocal and seemed to be focused on something on the ground. I paused, then slowly approached through the tall grass. As I got about 1/4 of the distance to them, what pops out from behind some tall grass? A bobcat!!

I froze. It froze. It thought I hadn’t seen it, so it slowly backed behind the grass, crouched then slowly turned around and started to go the other way. I quickly backtracked to the trail and returned in the direction I had come in hopes that I would see it try to circle back around me. As I did this, I kept track of what the ravens were doing – they had watched the whole encounter happen and now I realized they had absolutely been following this cat. As I paused in the trail after about 20 yards to listen and gauge my next move, the ravens flew over the area directly in front of me and circled a few times. They were tracking the bobcat and giving away its location! Sure enough, in about 10 seconds it appeared at the edge of the trail only 15 feet from me. We gazed at each other, and it slowly crossed the trail, pausing at the other side to study me. Slowly it moved in a circle around me and then passed, stopping to watch me at a number of times. OF COURSE I didn’t have my good camera rig with me, but, I was able to really enjoy a few moments of being close to this amazing animal – and snap a bad pic with my cell phone.

I love when “bird language” gives clues like this about what is happening on a landscape. That is part of the fun of being out there and staying aware – and no matter how many times it happens to me, it always seems like magic. So fun.

Right after that encounter, I saw a California newt on the trail – likely returning from a vernal pond where it bred, to seek refuge in the leaf litter under some trees during the warm and dry months of summer. I’m always thrilled to see these little salamanders.

Another 50 yards up the trail, as I went off-trail and into some thick cover, I heard and then saw an agitated Cooper’s hawk fly into the eucs where I was headed. Then I heard two great-horned owls respond, irritated about the irritated Cooper’s hawk! The Coop flew off, so I proceeded on. A loud rustling sound quickly caught my attention and I watched as a turkey flew up into some high boughs of a eucalyptus tree to roost for the night. As I walked under to get a better look, I heard the Coop again. I backtracked down the trail to where I had been before, and there in a dead tree was one of the great-horned owls, sitting very calmly with a backdrop of Richmond, Mt Tam, and a twilight sky. And right by it on the other side of the tree was the Cooper’s hawk, protesting loudly. Occasionally it would fly off and then return. This scene continued for about five minutes, and finally both birds departed. I am convinced there is a Cooper’s hawk nest adjacent to the area where the great-horned owl nest is. As I started to walk away, I heard a few juvenile red-tailed hawk calls in the background – hopefully I’ll see them fledged and playing in the area soon.

“Current Zach” is very pleased that “past Zach” got off the couch. Thank you, thank you, to this Land – this Land that has given me so much. The fact that we have such amazing parks so close to an urban area is a testament to the conservation efforts and hard work of so many people here – and I am grateful. Also very exciting that a bobcat has moved into the area, I hope to get to see it more! 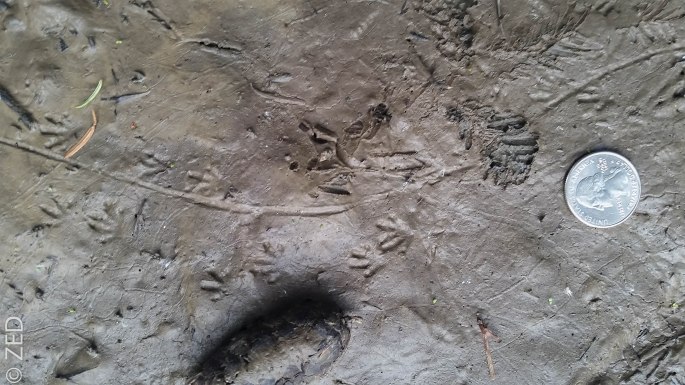 You can see in this photo a great example of the understep walk that these awesome little creatures move in, with the five-digit rear feet landing just behind the four-digit front feet. So cool to see them walk. Note also the tail drag in the middle.

I couldn’t help but smile in the dwindling light tonight, as my footfalls fell softly on the soft wet ground to a chorus of water drips falling from the leaves around me. It hasn’t been often this year to feel the rain drops on my face – hopefully we continue to get some more before the usual rainy season ends in a month or so.

As I reached the high ground on my short wander in Wildcat Canyon, the winds started to pick up and the rain became heavier. I gave a couple of hoots at a spot where I usually see one of the pairs of owls, and after a few steps I saw one of them perched out on a branch in his “transition” spot where he goes just before heading out to hunt. He was hunkered down in the direction of the wind and rain to the west, leaning over to allow the gusts to flow around his feathery coat. But after a few moments, he seemed to think it a better idea to go back to bed, and he returned into the deeper woods of Monterey Pine and Douglas Fir where he took a few moments to give a few hoots.

As I hopped down the side of the hill, I noticed a number of newts were also out enjoying the rain. Towards the bottom near the parking area, I found one of them enjoying some breakfast – an earth worm! 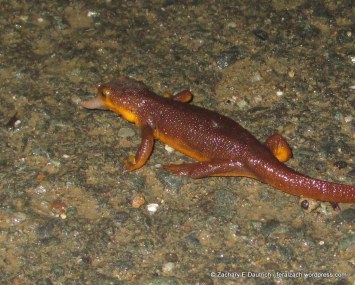 It only took the newt about a minute or two to finish the worm, which didn’t seem to struggle all that much. After it was done, it walked off into the canopy of some milk thistle on the side of the path.

The newts I saw tonight are likely the California Newt, Taricha torosa – hard to differentiate from the rough-skinned newt (Taricha granilosa) which is also found in this area.