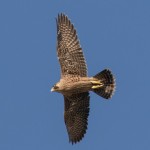 It has  been a rough start for a nesting pair of falcons in Oakland. Or rather, one of the brood. This particular nest has two young, and they fledged on Thursday and Friday. Unfortunately, one of them ended up down on a roadway in traffic on Friday evening, right as I arrived to watch them. Of course I took off running, hopped a fence and ran to the road to attempt a rescue.

When I got to it, the fledge was hunkered down in the middle of one of four lanes of traffic. I managed to stop traffic, but not before a woman ran directly over the bird (without any wheels crushing it). In fairness, it is Oakland, and I probably looked like a crazy person because I had already taken off my t-shirt to grab the bird as I tried to stop traffic. Still pretty lame though.

I scooped the little guy (it was originally ID’d as a female, but it seems really small to be female, so I’m calling it a he for now). He had sustained damage on his lowere mandible, but otherwise seemed to be intact. I’m not sure if the damage occured due to a vehicle strike, or if he hit his beak on his way down to the roadway. The damage was severe enough that it warranted an exam by a professional. These new fledges are not great fliers, but they are even worse at landings. After the initial shock wore off, he was very fiesty and not happy about being put into a box – which is a good sign. A friend who is part of the falcon fledge watch took him to a wildlife rehab facility for assessment. His status is still questionable, but we are hoping that he can be released again into the wild. It could go any way at this point, but I am hopeful.

What is interesting are the circumstances of his crash landing. He had taken off on a practice flight, and it appeared that the adults actually were chasing him as if he were an intruder. It happened very fast, but initially we thought we were seeing the adults chase off an intruder, then we quickly realized it was the youngster. Each time he tried to land on a high perch, an adult swooped on him and he took back to the air until he finally tired out and went down on the road.

Maybe his parents were disciplining him like the Japanese parents who left their son in the woods recently. A bit overkill, ya think – tone it down a bit maybe? It was certainly an unusual event, and our assessment is purely conjecture. There is speculation that this pair of falcons is very young, so perhaps they just haven’t figured out the whole parenting thing just yet.

Another friend of mine saw and got a picture at another falcon nest recently of one of the adults actually helping a new fledge land!! The adult flew beside and slightly behind the younster, and actually assisted it up to a perch! Perhaps the parents at this nest were trying to help, but their efforts actually made the situation worse. Hard to say at this point.

Here are a few pics of the remaining family from the past few days. 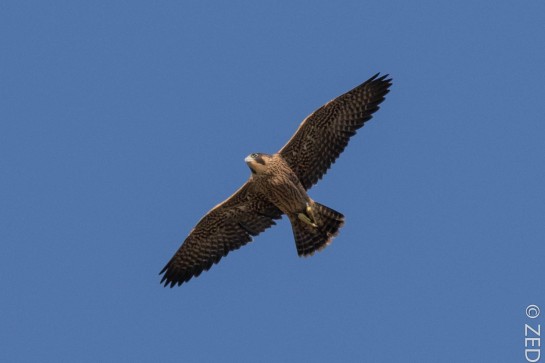 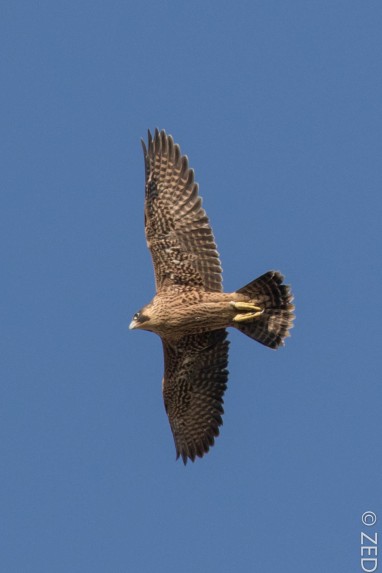 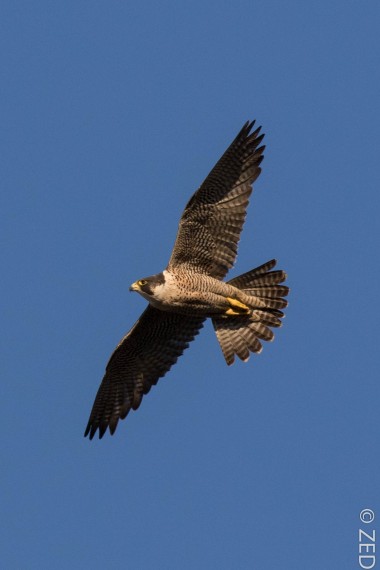 In addition to being a smaller bird, the tiercel (term for a male falcon) happens to have much lighter plumage on his chest and belly, which helps when trying to tell them apart if they aren’t next to each other to know by size (female is bigger). The female has some strong barring on her entire underside and a bit of a buffy tone, whereas the male has a lot of white and the barring only extends partially down under his wings, not across the whole belly and chest. 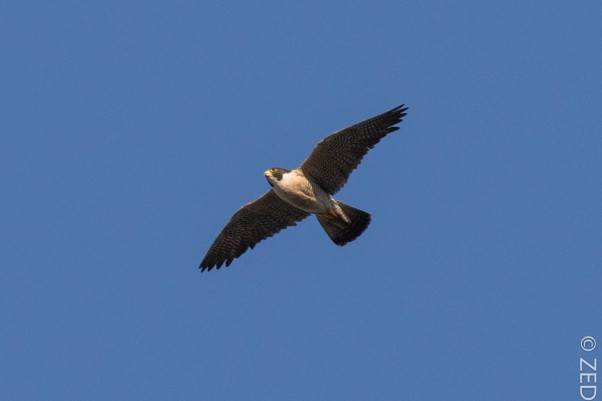 The injured bird is incredibly beautiful, as I was walking back with him in my hands, he was looking up at me with giant, shining, dark, dark brown eyes. Pure Wild looking up at me. I’ll never forget those eyes. Hopefully he gets to take to the sky again soon!

You can see in this photo a great example of the understep walk that these awesome little creatures move in, with the five-digit rear feet landing just behind the four-digit front feet. So cool to see them walk. Note also the tail drag in the middle.

a few weeks ago, i had the pleasure to accompany some friends and dedicated raptor-enthusiasts to see a bald eagle nest in alameda county that had two newly fledged juveniles. bald eagles have been slow to return to the Bay Area, and there are only about 16 nests currently in the vicinity from Monterey up to Mendocino County. a good sign to see them coming back.

they were comical to watch – flying was fairly easy, but the landing part was still a challenge. they would put their feet down 100 meters before their intended perch, and often overshoot it and have to fly around for a second attempt or find another spot.

they were begging for food from their parents – pa was about a mile away (out of ear shot, likely, from the incessant begging), and ma seemed un-phased by their constant calls, looking regal on her perch as she preened ignored their calls.

she did make one or two half-hearted attempts at a fish in front of us in our boat, but it was a leisurely sunday morning for all involved overall. 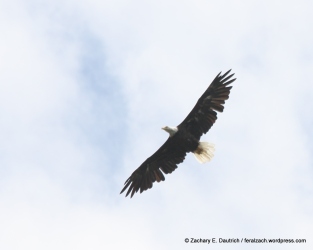 an amazing day out on the water with these majestic birds. special thanks to Mary, Roy, Carol, Megan and Cagney for this adventure!

Haya was released successfully on Monday, it was quite a day.

the toss to freedom! 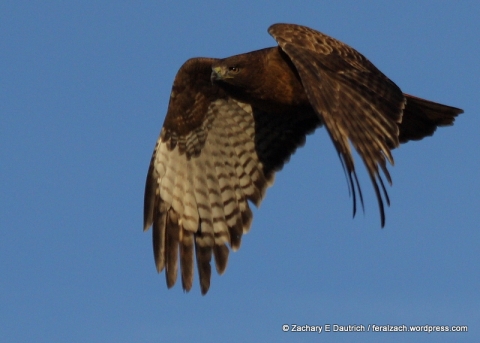 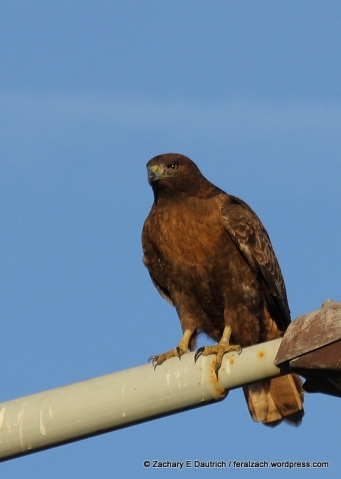 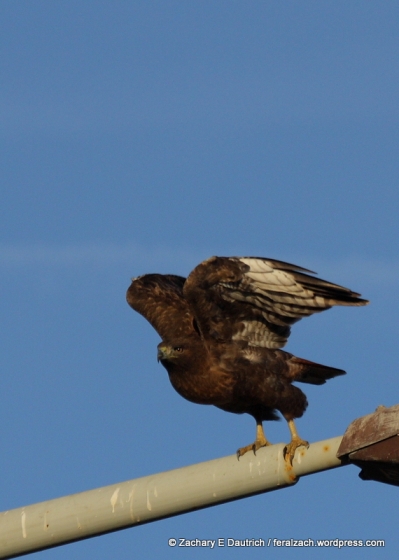 Ah!! The rains are here in abundance, and everything on the land rejoices!

The snails, slugs and salamanders have come out.

(yes, that is a quarter next to this tiny being)

The California slender salamander is from 7-13 cm in total length. They breath exclusively through their skin! Because of this, it’s always a good idea to handle them minimally (or not at all) – also, some species of salamanders actually have strong neurotoxin that if ingested can kill a human (California Newt). The California newt secretes tetrodotoxin, which is 100 times more potent than cyanide!

I must admit they’re kind of cute. They have muppet-like four-toed feet on those tiny little legs, and do more slithering than walking. 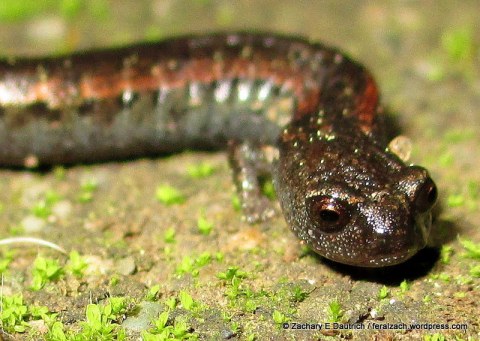 This small garden snail has a shell that looks like it is made of pure gold.

A slug on a budding flower was doing its thing – the yard at night is magical after the rains! 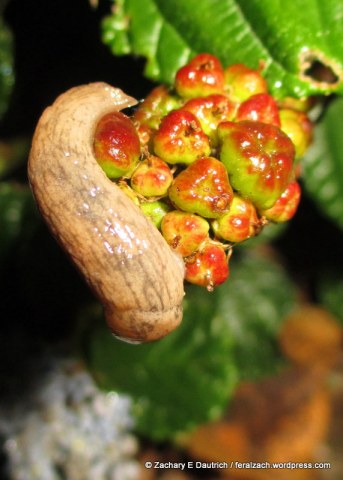