The coyotes in Wildcat Canyon live an interesting life … living on the outskirts of a major urban area in a mixed-use regional park. They share the space with people, dogs off-leash, cattle, and nosy trackers like me. I often see dogs chase these ‘yotes, but they always seem to evade with ease. Many times though I see them flowing over the grass covered hills, using little dips and drainages as cover in broad daylight unseen, with unsuspecting people and dogs walking just yards from them. They seem to have a sixth sense for avoiding discovery. And many times they are hunting gophers in these same areas, gingerly walking over the landscape in a slow, focused and methodical way, waiting for the furry prey to disturb the soil and give away their location just inches below the surface. Given the number of individuals I’ve seen/heard in a small area so far, I’d say they are doing pretty well. 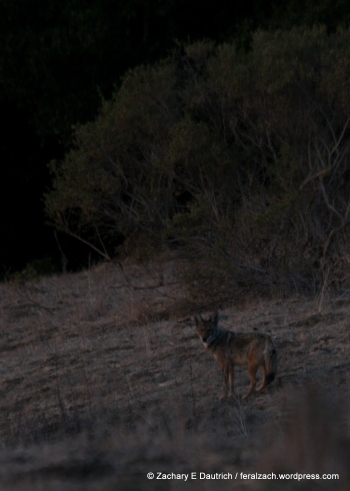 The female shown above is exceptionally beautiful, with a vibrant, glowing coat of mixed browns and grays and contrasting black fur along her spine and tail. She seemed really healthy, and she didn’t notice me as I photographed her scouring the hillside for gophers.

It is also the time for many birds to be courting, and the red-tailed hawks were out in numbers today after the brief rain, dancing and soaring through the blue skies along with two pairs of ravens. In an unusual role reversal, I saw one of the red-tails chase a raven – usually it’s the ravens/crows harassing the tails. Once the sun set, one of the multiple pairs of great-horned owls that call this area home were hooting to each other in the mixed Monterey Pine and Eucalyptus forest at the top of the hill. There is no better compliment to the still feeling just after sunset, when twilight has usurped the day and that electrical charge starts to build signaling the changing of shifts, time for the creatures of the night to start their day.

This entry was posted on January 31, 2014 by feralzach. It was filed under Uncategorized and was tagged with ca, coyote, red-tailed hawk, wildcat canyon.