We were escorted up the mountain at Mount Diablo State Park by all the ones with wings on this hot spring day … dragon flies danced together in the sky at low elevations in the hollows of oak woodlands, then the ash-throated flycatchers seemed to encourage us on as the terrain got steeper and a bit more dense. The wild flowers were out too, along with lady bugs and copious amounts of poison oak, all along our ascent. As we approached the top, we spotted a pair of adult golden eagles who made several passes until finally floating up into the sun. Then Anise swallowtail butterflies appeared and flitted around us until we reached the summit, where there were many of them dancing around as if celebrating their own journey to the top. 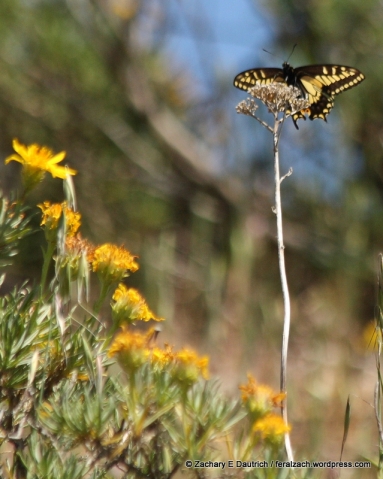 This entry was posted on April 22, 2013 by feralzach. It was filed under Uncategorized .