Autumn is my favorite time of year, and I’m always excited by the usual harbingers of Fall … pumpkins, raptor and bird migration, amazing light, crisp electric air, foliage color changes, bay nuts, and an instinct deep within me that drives me to figure out what ridiculous costume I’ll wear for Halloween.

There is also the call of the rutting bull elks, if you’re lucky enough to be close to some – a sound that reminds me of whale calls penetrating the surface of the water and echoing across the landscape. I love to see and hear them, especially at this time of year, when the bulls have their “harems” of cows protectively corralled close to them. If one tries to stray too far, the bull will herd her back. And if another male comes too close, a fight can ensue.

They make their bellowing, haunting calls often, seemingly to advertise their virility to the females and their dominance over other bulls -with the occasional chirping siren-like responses from the females, and other males calling back to defend their own space and ladies. It’s all about the ladies at this time of year.

On Sunday we visited the herds at Tomales Point to immerse ourselves in this Autumn rite, and though initially we were disappointed by the thick fog that enveloped just the very tip of the peninsula where the elk live, it turned out to be a good thing. Fog is one of the natural states of this area, and the landscape comes alive when it is foggy. Not only that, the fog allowed us to get closer to the elk than we would have been able to otherwise, creating a smoke screen for us as we approached from downwind to find a nice rock outcropping overlooking two small herds. And, as an added bonus, most of the two-leggeds depart with the fog!

Ironically, the best pictures I got were when we were leaving in our vehicle as a herd was milling about near the exit road. Vehicles can be the best blinds … and they’re mobile!

Oh, and the fog made a stunning scene for pictures. 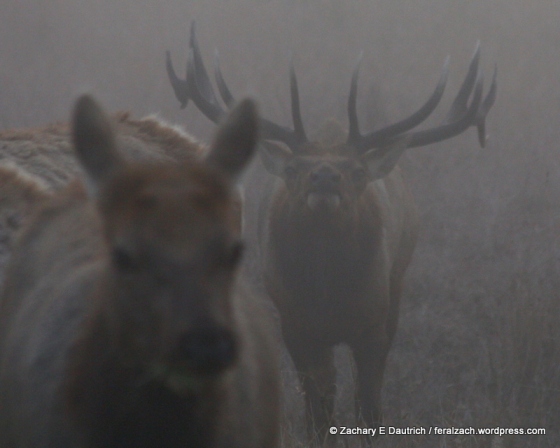 I caught this one mid-bellow!!!!!!!!! The sight and sound was incredible. 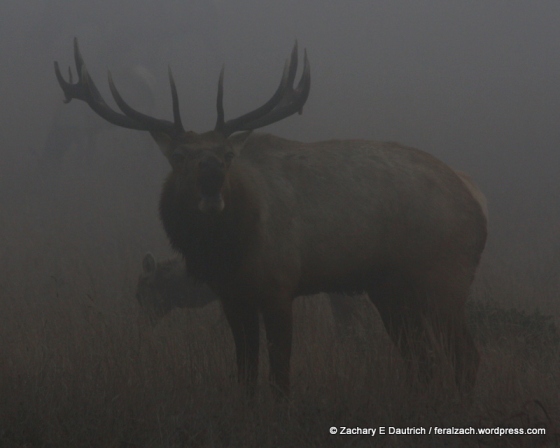 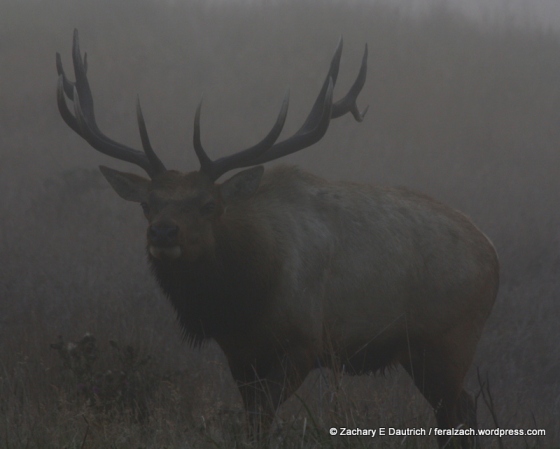 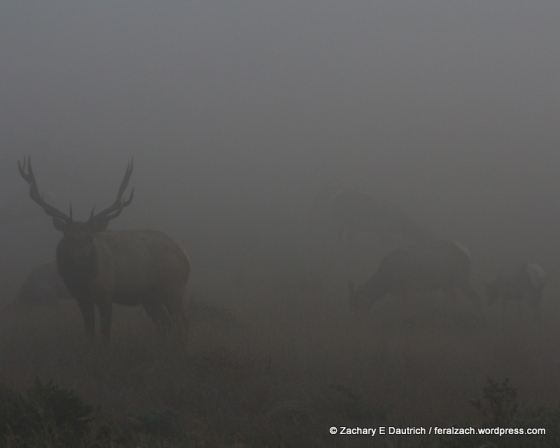 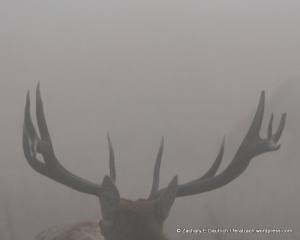 As we were leaving the Point Reyes area, heading East back towards the big city, we saw a great-horned owl perched on top of a utility pole, just a shadow highlighted by the twilight. We stopped to watch it, and suddenly we heard the unmistakable sound of a begging juvenile great-horned owl very close by. Within a minute or two, it had flown up to land on the utility wires, begging intensely for its breakfast. After shredding its prey, the adult jumped over next to the juvenile and handed it over. Oddly, the young one didn’t stop begging, it just perched on the wire with the food in its talons. The only time it paused was when I mimicked its begging call, at which point it would look at me for a few moments, then return to begging. Must have been a spoiled young one … it does live in Marin County, after all. 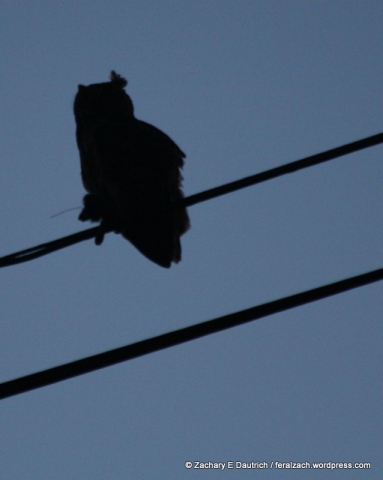