the story of a kill

I was wandering on the edge of a marsh by the San Pablo Bay just north
of the Richmond Bridge, an area I’ve been exploring a lot lately.

As I moved across a transition of pampas grass into more open
grassland area prior to the pickleweed marsh, I flushed a red-shoulder
hawk from the ground. As it flew away, I didn’t see anything in its
talons. Intrigued, I wandered off the trail to see if I could figure
out what it was doing. Lo and behold, I found a dead duck! Female
mallard, to be specific, and she was lying inches from her nest
underneath a blackberry bush. The nest was beautiful, and it contained
nine eggs. 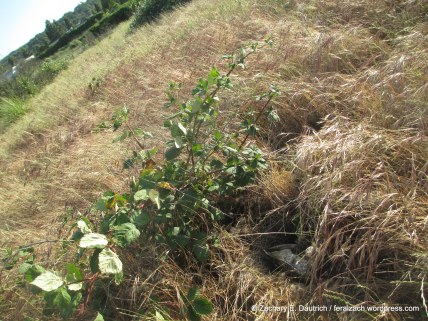 prey including voles/mice, snakes, robins and other birds – but I
would not have suspected it would/could take a full grown duck.
Granted, she was comprimised being on the ground and on her nest, but
it’s still impressive.

I feel confident the rsha made the kill. The kill was very fresh, and
almost the entire neck of the duck was plucked and eaten. The breast
and the eggs were untouched. You can see the circle pattern of plucked
feathers around the kill, indicative of a bird predator.

I returned to the site later in the day, about four hours later. The
carcass was untouched since I had been there except for yellow
jackets. 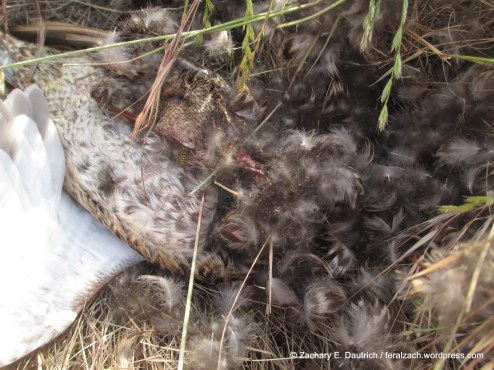 As a sidenote, I learned that ducks are difficult to foster – I tried
to find someone who was willing to take the eggs to try to incubate
them to no avail.
(though I did crack one open, it was still mostlly yolk – I suspect
they had been laid very recently and perhaps she had just started
incubating) 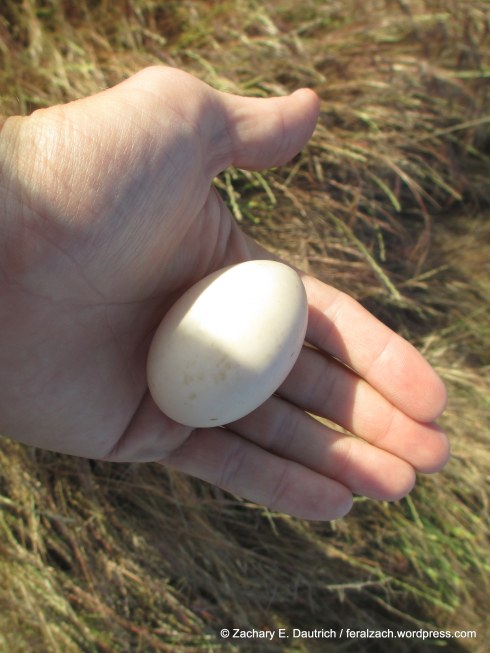 I probably could have eaten the eggs (and the duck breast, for that matter!) – but I decided to leave them for the other creatures of the swamp that night. Sure enough upon my return a few days later, there were just feathers and a few bones left.