the other week during a wander with my friend and mentor Jim Sullivan (see his website and tracking class offerings here)  – an amazing tracker, naturalist, and all-around brilliant fella – and other great trackers like Ginger; we had a suburb opportunity to see some canine species’ track diversity laid out before us. it’s not often you get to see four canine species’ tracks together in decent substrate. identifying the differences between them can often be very challenging, so any chance to see any of their trails, also in varying substrates, is incredibly illuminating. to get to see all of them in one day avails an incredible study opportunity.

coyote vs red fox vs gray fox vs domestic dog – it is a study that is always ongoing for me, especially with partial tracks and trails. these species don’t always overlap geographically, and even if they do, often their seasonal movement patterns don’t overlap in such a way that you can see their tracks together, especially in one day. sometimes it is very obvious the difference, but sometimes it can be confusing given the right circumstances. 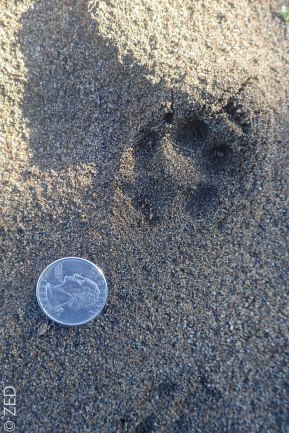 the red fox tracks we found were on the small end of the spectrum – there was some debate about id due to the size. it was at the small end of the red fox size spectrum  (and at the large end of the spectrum for gray fox), especially upon initial (eye-ball) inspection. but further analysis (and healthy, civil debate among accomplished trackers) left us concluding red fox. context, the full trail, and multiple tracks often help in track id. actually it’s often about context. having the chance to see full trails, and the way the tracks vary within each substrate, really help in honing the ability to discern one species from the other in the future when there is only a partial track or trail. 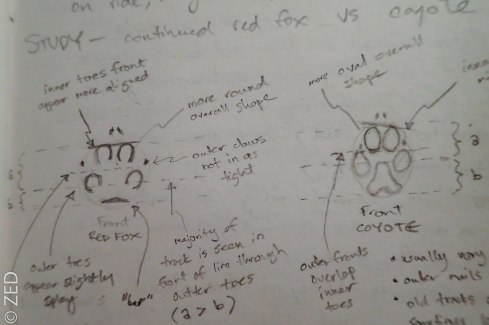 drawing and journaling is a great way to solidify the memory of ideas and patterns in the ol’ brain.