As I was winding down my day while traveling in southern CA recently, I had the pleasure of watching a showdown between a juvenile red-tailed hawk and an adult Cooper’s hawk (likely a female). When I got back to the house where I was staying, I noticed the juvenile red-tailed hawk perched in a relaxed manner on the peak of the house next door, watching the sun go down. 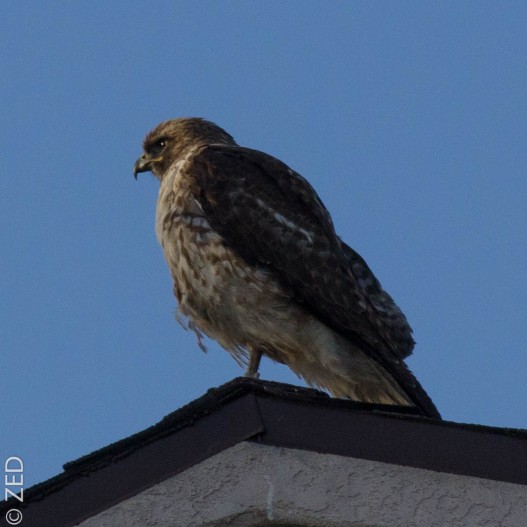 This hawk is most likely about 1 year old, quite an accomplishment to have survived its first year (raptors have mortality rates in the first year as high as 70%!). Juvenile red-tailed hawks lack a red tail, often have lighter colored eyes than adults, and have some spotty patterns on the belly band (versus more streaking in adults). It seemed relaxed as it faced the setting sun, evidenced by its fluffed-out feathers and its left leg lifted up into its belly feathers. You can see on the right leg, there appears to be a band on this bird – possibly it was caught and banded during the migration last year.

I relocated to a second-story balcony which afforded better views of the bird, and as I stood there watching suddenly another raptor appeared on the scene! On a power line at about eye-level to me, an adult female Cooper’s hawk alighted and assumed a similar relaxed pose to the red-tail, with one foot up as it surveyed the area. 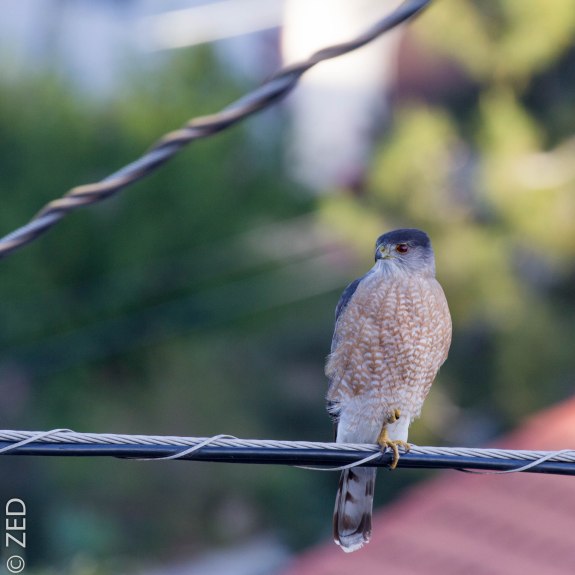 Cooper’s hawks are part of the Accipter genus of birds in the Accipitridae family, and can be extremely difficult to discern from their close relative the sharp-shinned hawk – a smaller version of this bird. Most raptor species exhibit reverse sexual dimorphism, meaning the females are larger than the males. What makes the identification of a Coopers versus a sharp-shinned hawk especially difficult in addition to very similar plummage is that a male Coopers can be about the same size as a female sharp-shinned hawk. In the above picture, there are some really helpful features that help key this bird as a Cooper’s hawk.

I am not 100% certain that this bird is a female, but that is my initial guess based on size relative to the red-tail (which I thought could be a female based on her large size – but again, no great scale for reference).

The Cooper’s hawk didn’t remain relaxed for long – as soon as it spotted the red-tailed hawk perched above it became much more alert, dropping its leg down and staring intently (though, to be honest, all these birds seem to only have a single facial expression – and if there is one word for it, it is “intense”).

In the above picture, you can see the white feathers that protrude below the tail on its ventral side. This is a helpful feature to identify accipiters in the field from a distance, but one needs to be aware that Northern harriers have a similar white patch that appear on their dorsal side.

Finally the Cooper’s hawk decided to move in on the red-tail – likely it has a nest in the area and did not like the red-tail hanging around too close. The Coop flew up on top of the chimney, and the showdown began. You can see the size difference fairly well in this photo (with the Coop on the right). 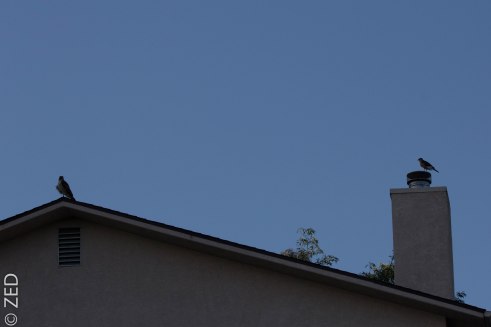 At this point, the red-tail took notice of the Coop but still had a leg up (no pun intended) and was facing away from it. In what had to be some sort of bird statement, the red-tail proceeded to slice (poo) in the direction of the Coop! 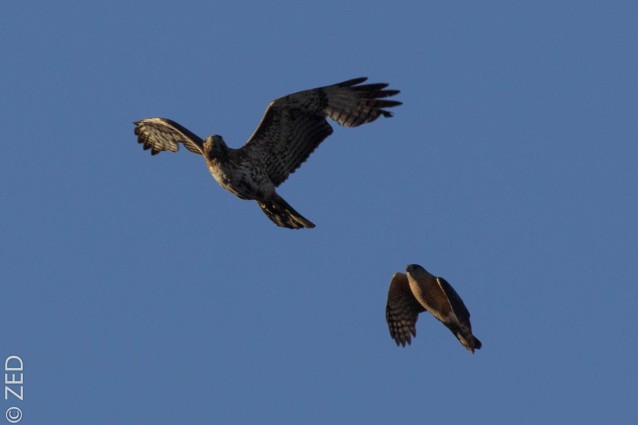 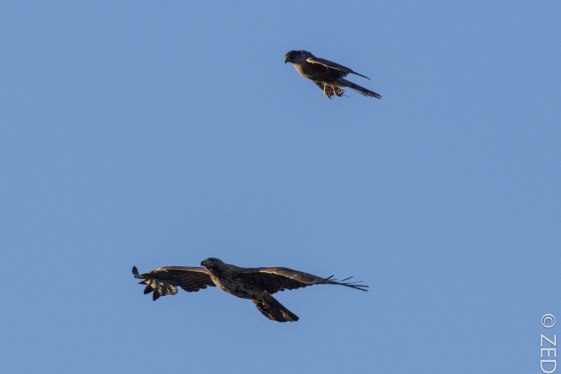 Awesome to see these birds and witness this close encounter!

This entry was posted on April 10, 2016 by feralzach. It was filed under Uncategorized and was tagged with Accipiter cooperii, bird of prey, Buteo jamaicensis, ca, cooper's hawk, raptor, red-tailed hawk, San Diego County.