There is nothing quite like seeing young animals play, and it has been such a treat on my sunset/twilight wanders lately to see a pair of fledgling red-tailed hawks in Wildcat Canyon cavorting in the strong winds up in the hills for the past week or two. They are still sometimes unsteady as they soar in the air, and during their landings – wheeling awkwardly in the winds, or alternating repeatedly landing and taking off from a hilltop trying to ride fast moving gusts, like a feathered, bouncing ball. Sometimes their parents were silhouetted in the background above them, unmoving in the strong winds as if hanging from an invisible thread in the sky as they hunted. For the first week or so, every time the two young ones were in the air, they were loudly vocalizing non-stop, as if shouting “holy shit I’m flying, holy shit I’m flying!!!” That’s how it felt, watching their exuberance in the sky.

Despite their awkwardness at times, there were other times that they seemed to be quickly mastering flight in the high winds – chasing each other over the hills and around tree tops, stooping and diving on one another, locking talons in the sky, and pushing each other off of perches – even “barrel rolling” in the sky like ravens often due (an acrobatic maneuver during which they flip over on their back for a few moments in the sky). Sometimes I forget that I’m without any wings as I watch them, feeling like at any moment I could jump up and join them. It looks like just about as much fun as any living thing can have. 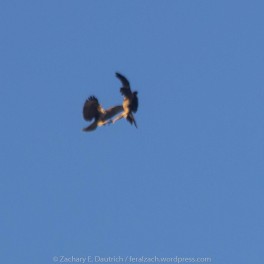 Hopefully this pair will survive longer than last year’s young – there were three from what were likely this same pair of adults, and none of them survived more than two weeks after fledging. Once night comes, it is the domain of the great-horned owls … and there are a lot of them here. It’s encouraging that they’ve lasted this long, soar on young ones!