red-tails in NYC – the legacy of Pale Male

I was walking through Union Square in New York City this week. The city had its seasonal holiday vibe happening, despite the relatively warm weather and steady rain that was falling. As I strolled from the subway in the park with the many other people, in this man-made clearing among the tall buildings around it, I suddenly had an impulse to turn around and look up. I turned almost fully around, and above me, a flock of rock doves (pigeons) was in determined flight – and in fast pursuit was a familiar form that at first didn’t register with my brain due to the surroundings. A red-tailed hawk!

The hawk made a reasonable attempt at grabbing one of the pigeons in flight, then it alighted on top of one of the “canyon” walls at the north end of the square. It was a comical sight – the red-tail was sitting on the east side of the building, its head turning back in forth in what seemed to be bewilderment, and about 30 pigeons sitting on the west side of the building about 40 feet from the hawk. It was as if there was an official “time-out,” and the players in this game were on the sidelines waiting for the next play.

It seems I was the only person to see this happen, but luckily my spinning around in the middle of the square watching birds flap around, and staring up in the rain at what probably seemed like nothing to the casual observer, was just a minor crazy behavior in this place. I couldn’t help but smile at the whole scene. Since before I can remember I’ve had a connection with Red-Tailed Hawks, and to see one here in amid the concrete and steel was like seeing an old friend. What made me turn around? I don’t know, but I’m thankful for it.

Red-Tails are adaptable animals, but they have been one of the more recent additions to the city-scape, joining some of the other animals that have been able to survive in the shadows of intense human development like Raccoon, Opossum, Rat, Mouse, Bat, Fox, Crow, Pigeon, Gull, Peregrine Falcon and Others. It made me think about one of the first documented red-tails that came to call a city, this city, home – a hawk named Pale Male. 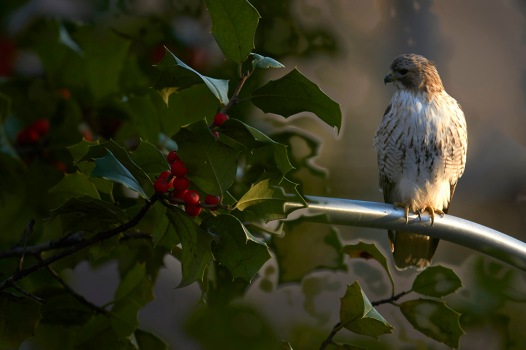 Pale Male (so named due to his distinctively pale plumage) made a big impact on my life, as he has on the lives of many others. I was living in New York City in 2004, on the Upper West Side near Central Park. It was a particularly hard time in my life, and I was struggling to find a connection to the Earth in the middle of the chaos of the city. I would walk through the Park, through The Bramble, almost able convince myself I was somewhere else in that island of earth and plants and animals smack in the middle of one of the biggest cities on Earth. Once through, I would go to the Boat Pond and sit, hoping for a glimpse of Pale Male or his mate or offspring. We were kindred spirits, neither born of the city, but both in it. Surviving. It was surreal seeing this large raptor gliding above the yellow taxi cabs on 5th Avenue, or perched on the railing of a balcony on an apartment building. But there he was.

And still is. Life in the “wild” is hard, and there are many perils for any animal to deal with – especially in the city. In addition to all the regular threats, city birds deal with high densities of people, fast moving traffic, and most the deadly threat, rat poison. Many animals consume rats or pigeons that are still alive but have ingested poison, and can die from acute poisoning or from an accumulation of toxins. Not only was this bird one of the first to be documented making his territory in a large city – nesting and rearing young – but he’s still around. He has had many young, and some of those birds now also call parts of the city home. It’s an amazing saga. He has seen many of his mates succumb to rat poison or other perils, yet he still calls 5th Avenue home. It’s estimated that he hatched in 1990 – making him almost 25 years old!!

Much of his life has been documented in photographs tirelessly by a fellow named Lincoln Karim – his website, palemale.com, has some amazing photos of this bird and other wildlife in Central Park. He is out there photographing him almost everyday, since 2002! When I would go to the Boat Pond in Central Park, Lincoln often had his “rig” sitting out there – a large cart that carried his telescopic lens that was the size of my torso, and a large monitor screen so that other people could see the bird as seen through his high magnification lens. Many many thanks to Lincoln for his documentation and for sharing all his work and allowing us to be part of Pale Male’s incredible life.

Thanks also to Marie Winn, author of Red-Tails In Love (about Pale Male and one of his mates) and one of the original observers of Pale Male. She has documented his life beautifully in her book and also on her blog where she also chronicles the wildlife of Central Park.

And thanks to Rachel Carson and all the people who worked (and work) hard to regulate pesticide use and raise awareness about raptors and wildlife, which has allowed Red-Tails and many other bird species to rebound to the point of repopulating to healthy numbers once again.

Was the bird I saw in the square a descendant of Pale Male? It’s very likely, but hard to know for sure.

This entry was posted on December 29, 2014 by feralzach. It was filed under Uncategorized and was tagged with Buteo jamaicensis, new york city, pale male, red-tailed hawk, union square.