On this beautiful Spring-like (?!) morning, I had the privilege to see my old Falcon friends on the Fruitvale Bridge in Oakland/Alameda. Just after I arrived, Hiko, the tiercel (male falcon), came in to land on the Oakland tower with breakfast – which this morning appeared to be a Eurasian collared dove. Doing his part to remove invasive species today, I guess. Unfortunately my vantage point had the sun back-lighting my photos and I was pretty far away, but it was fun to watch as he really went to work on this bird, de-feathering it as we watched. Feathers floated down like a snow storm beneath him, he was working furiously to get at that meat! 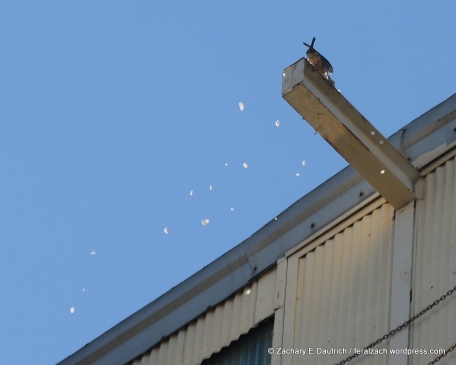 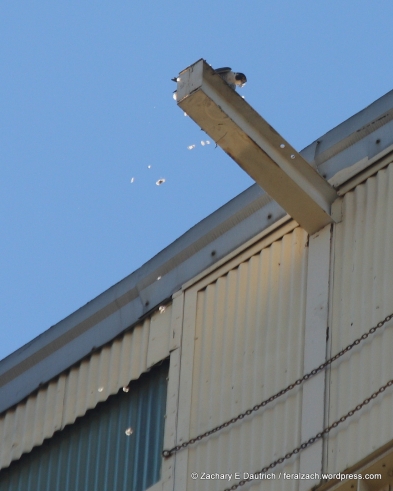 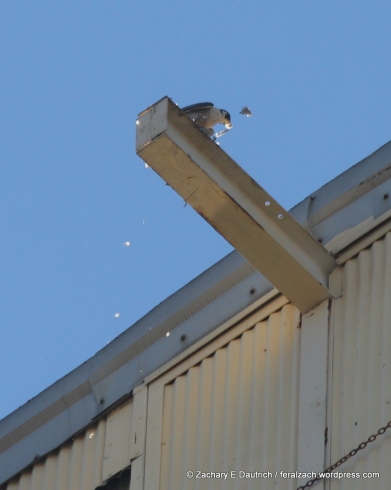 After a little while, his mate came flying in from the northwest over the waterway, and she didn’t seem to see him as she landed on the other tower. She started to e-chup (vocalize), and he let her know he was there with a few response calls. Usually this time of year, the fella would be offering meals to his mate as part of the courtship process, but he seemed intent on keeping this meal to himself at that moment. It is just the beginning of the courtship and mating process, so maybe he’s just not feeling the love quite yet.

Hiko, finishing up his portion of breakfast

As Hiko was finishing his meal, Tremaine took off from her perch to investigate a little more into what Hiko was doing.

Tremaine landed back on the Alameda tower, and finally Hiko seemed moved to share his breakfast with her after being discovered hoarding his food. He took off with a portion of what was left and flew to her on the other tower. Typically, the tiercel would drop-off the food for the falcon as part of the courtship process, but at the last minute he had second thoughts about sharing and he veered away! Or perhaps he was flirting, falcon style. She immediately took off after him, and within seconds had “commandeered” her portion from Hiko in mid-air over the bridge! Good stuff.

She took the small portion of the dove that he had and did a lap around the towers with it, then headed back to the Alameda tower to eat. 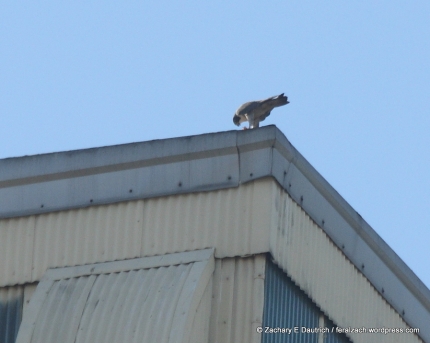 Hiko then did a little survey flight around the area and settled in near Tremaine on the Alameda tower to do some preening after his crop-busting breakfast.

After Tremaine finished her portion, she flew over to the Oakland tower (interestingly the OPPOSITE tower that Hiko was on – I don’t think he won any extra points with his sharing “efforts”). The two settled into a mid-day lull as they digested their food and preened, and I left them to enjoy the sunny day.

This is a shot of Tremaine when she was eating that I took with my camera phone through a friend’s scope (digiscoping, it is called).  Not great quality but quite a zoom. You can see Tremaine has a full crop, she must have eaten something on her own before getting this “gift” from Hiko. 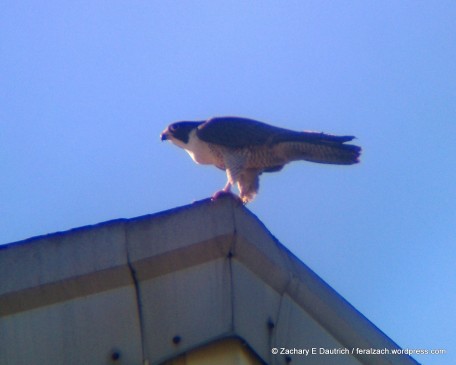 These birds are so beautiful, watching them fly, with such quickness and grace, never gets old.

This entry was posted on February 21, 2014 by feralzach. It was filed under Uncategorized and was tagged with alameda, california, Falco peregrinus, falcons, fruitvale bridge, oakland, peregrine falcon, raptor.