I don’t often link to other posts, but this one I had to share. What an amazing photo capture, and evidence of the incredible predatory power of the golden eagle. I’ve seen (disturbing) videos of falconers setting their golden eagles on foxes and small wolves in the Far East (further East than New Jersey), but this is equally as impressive. 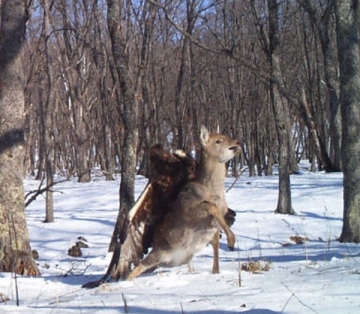 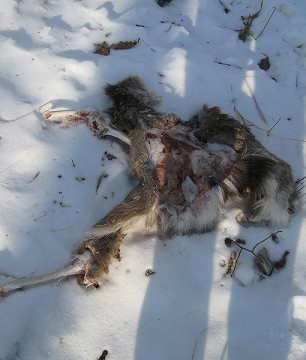 For more information on this, check out this blog post:

There is evidence that at one time there were eagles large enough to kill humans, and they may have only died out 500 years ago in certain parts of the world.

“I tease my neighbor because she worries about red-tailed hawks carrying off her small dog, but the truth is that not so long ago, eagles would have carried off our small children. One of the most famous hominid fossils is the skull of a 3-year-old child found in Taung, South Africa. The Taung child was a member of the Australopithecus africanus species, which lived in Africa from about three million to two million years ago. The skull has holes neatly punched into its eye sockets; they were made by the talons of a large bird akin to an African crowned eagle. The skull was found among other bones under what has been interpreted as a nest. More recently, great piles of roughly five-million-year-old fossil monkey skulls, many of them with talon holes, were discovered in Angola under what appear to have been four separate eagle nests.”          – Rob Dunn

And see this regarding Haast’s Eagle from New Zealand, which was large enough to prey on small humans and only died out around 1600 AD …

Is it any wonder these creatures inspire such awe?

This entry was posted on September 25, 2013 by feralzach. It was filed under Uncategorized .