Evidently I was late to the party Sunday, but for almost two weeks there was a huge herring run at Ferry Point on Pt. Richmond. It attracted large numbers of gulls (in the thousands) – including some rare species – as well as sea lions, seals, other shore birds and humans with their cameras and fishing boats. I was a day too late! The fish come in every year to reproduce and lay their eggs. Many end up as dinner for the creatures listed above.

Despite being late for the climax, I was however able to see some of the left-over roe (eggs) that hadn’t been eaten and were attached to sea weed and other vegetation exposed at the low tide when I was there.  I’ll have to wait for next year to catch the action.

In Europe these fish are known as “silver of the sea” because of their long-standing role in the economies of many cultures there, and they continue to be a staple source of food that humans harvest from the sea and many animals depend upon them as part of their survival.

As I left I saw a beautiful quarter-moon with Jupiter shining right by it. 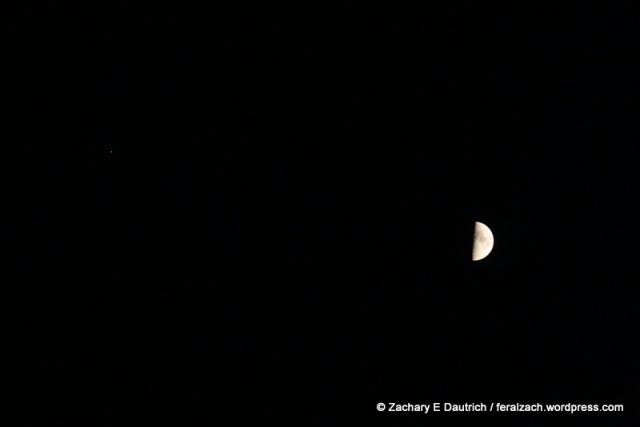 This entry was posted on February 20, 2013 by feralzach. It was filed under Uncategorized and was tagged with herring, herring run, jupiter, point richmond, quarter moon, roe, san francisco bay.