Hello, it’s been awhile since I’ve posted! I have a moment of rest today after what has been six days straight out “in the field” in the wilderness of Bridger-Teton National Forest and Teton National Park, working with a new cougar project in Wyoming – Craighead Beringia South’s Teton Cougar Project  (see my other blog chasingmountainlions for updates, coming soon, on that).

The fella pictured below was evidently raiding a neighbors’ garbage the nights prior to me getting this snap (the term “neighbor” being relative – they were one house away, but at a distance of 3 1/2 miles!)  – rearing on his hind legs to take a better look at me over the big sage brush. When I left he was slated for capture and for the attachment of a “naughty bear tag,” then to be released some distance away. It’s a three strikes policy, hopefully he will stick to more natural food sources from here on out to avoid being destroyed. The lack of rain has made many “natural” food sources scant. 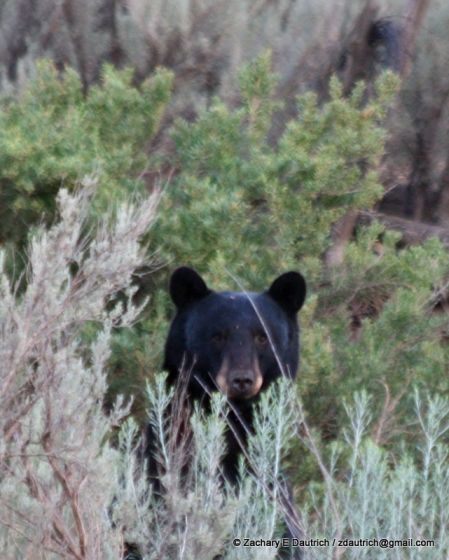 It was in, around, and ON the mesas shown below that we were tracking and researching cougars in western Colorado. At first the area was intimidating due to its steepness and the hot, dry climate – but I really grew to love the land and all that was on it. Amazing the diversity (and size!) of life that can exist in a high desert environment that seems to be devoid of much animal life during the heat of the day (when we dumb humans walk around). The creatures there have a mesa and valley kingdom that they rule by the dark of night.

I left Colorado a week ago and was treated to some beautiful sights and sites, both while there in the western part of the state and also in the mountains and the front range where I spent some time before driving up to Wyoming.

This entry was posted on August 12, 2012 by feralzach. It was filed under Uncategorized .